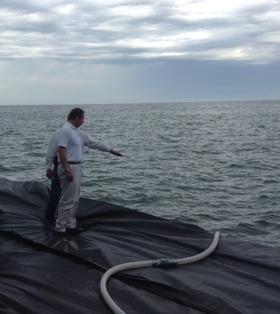 Governor Cuomo stopped in shoreline communities in Greece and Sodus Point to unveil some new technology designed to save homes and businesses from further damage from high water levels on Lake Ontario.

Damage he says is due in part to a late response from the board that regulates water levels on Lake Ontario and the St. Lawrence River, the International Joint Commission.

Cuomo says the state is testing two "Aqua Dams," water filled synthetic device that, when it works, acts like a portable dam.

"Essentially when it works, a 4-foot, 5-foot, 6-foot additional seawall that can be constructed exactly where you need it," he said.  "If it works, I want the state to invest in it.  Protect the homeowners now.  It's also reusable."

Director of the State's Emergency Management Office, Kevin Wisely, says the state is testing a 140 foot Aqua Dam in Greece and another 700 foot device in Sodus Point. 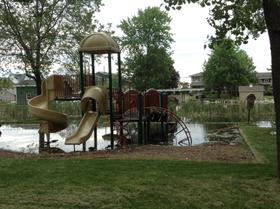 "It fills itself up and it becomes that barrier.  It'll be four foot high, about 9 foot wide, and becomes a barrier, essentially a break wall," he said.

Rick Maciulis has lived in a home on the lake for 15 years, and has doubts that the new Aqua Dam will protect his residence.

"Absolutely it will go over.  Water hits my second story window here.  When it hits the break wall, it splashes up 18, 20 feet," he said.

And he said the town of Greece and village of Sodus Point will be reimbursed $500 thousand dollars each for infrastructure costs due to the high water levels.

Governor Cuomo used the opportunity to again blast the board that regulates water levels on Lake Ontario and the St. Lawrence River, the International Joint Commission.

He said the agency bears much of the blame for flooding in New York's lakeside communities. 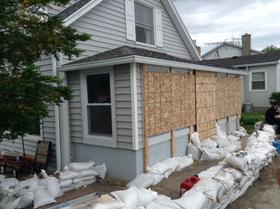 "They did not increase the outflows when they could have, and I think they pulled the trigger too late...and they got behind, and now we have a real problem,''  he said.

The International Joint Commission responded to Cuomo's comments by saying nobody could have predicted the severe flooding throughout the Lake Ontario-St. Lawrence River system caused by record rainfall.

The commission-directed board that controls outflow through a St. Lawrence River dam said Tuesday it would increase water releases starting Wednesday.

Governor Cuomo says the Aqua Dam is something, if it works, the state should invest in for the future:

International board decides to increase outflow of water from Lake Ontario

There will be more water flowing out of Lake Ontario in an effort to help ease the recent flooding conditions along the south shore.

The International Lake Ontario-St. Lawrence River Board agreed this week to increase the water flowing out of the lake at a greater rate. Secretary for the board, Arun Heer says this will be the highest outflow ever released from the lake on a sustained basis.

Because of that, Heer says officials will closely monitor the situation for a few days to see if there are any major adverse impacts.

The US Army Corps of Engineers predicts that water across the Great Lakes will remain high for the duration of summer, and even into the fall.

The Corps says these high levels are due to above average precipitation on the lakes. Forecasted levels on Superior, Michigan-Huron, and Erie will be the highest since the 1990s.

Lake Ontario levels will also remain high, after setting a record for highest average lake levels for the month of May.

Politicians and environmental groups continue to spar over the cause of flooding that's damaging homes and businesses along Lake Ontario and the St. Lawrence River.